This week I am lucky to be hosting the wickedly talented J.L. Gribble on my blog! Gribble is the author of the urban fantasy Steel Empires series. The third book in the series, Steel Blood, just released this week, and of course I already have my autographed copy.

If you’re a fan of the series, go get your copy of the third book now, what are you waiting for?? If you’re new to the series, start with book one, Steel Victory.


J.L. Gribble and I were talking about the now almost cliché staple of the urban fantasy genre—the Strong Female Character. It’s asinine to me that this has to be a *thing.* Can’t we just have female leads with strengths, without them being called out as something unique?
Here, Gribble offers her thoughts on the Strong Female Character issue, and discusses how her lead, a vampire named Victory, differs from the stereotypical lead of modern urban fantasy. Take it away, J.L.!

“I’ve only been participating in programing at conventions for a handful of years, but I’ve already lost track of how many times I’ve been asked to be on the “Strong Female Characters” panel. I guess the theory is that, as a female urban fantasy author who writes female protagonists, I can easily contribute to the discussion. Though not every hero of urban fantasy stories is female, it’s interesting how they’re automatically assumed to be part of that trope.
Male heroes, I guess, are supposed to be strong as a given.

I read an excellent blog post recently: “On Urban Fantasy” by Lucy A. Snyder, who has a history in writing urban fantasy herself. Much of her definition of the genre is pulled from expectations set by major publishing companies, which is certainly useful for those looking to be published by one of the “Big Five” (or Four, or Three, or whatever the number has shrunk to by this point). Since I write for a small press that specifically embraces books that break the mold, it was interesting from an academic standpoint to see where my books diverge in terms of protagonist.


According to Snyder, urban fantasy stories will often “feature a strong female protagonist who is a loner (but has friends),” “be written from a first-person point of view (“I woke up…”),” and “contain a love story or romantic subplot” (presumably involving the main protagonist.”
And I do…absolutely none of that. Sort of. I consider my leading lady Victory to be strong, and she’s cisgender female, but as for the rest of it? The cool thing about writing for a small press is that rules are meant to be broken.


Because interesting stories revolve around interesting characters, the first thing I did to flesh out the world Victory lives in was create even more interesting characters to surround her with. Instead of the expected burgeoning romance subplot, conflict develops through Victory’s long-term relationship with her daywalker Mikelos. “Meet-cutes” are, well, cute, but it can also be fun to the explore the drama that can arise when two characters have been together for nearly a century. They have an adopted daughter, acquired a foster son, and Victory’s sire keeps hanging around the place. Victory is many things—mother, politician, retired mercenary—but “loner” is definitely not one of them.
All that, and I write in third-person rather than first.


I certainly don’t hate “traditional” urban fantasy. Two of my favorite series are much more faithful to the criteria listed above, and it certainly doesn’t cause detriment to the stories in any way. Kitty Norville, written by Carrie Vaughn (first book: Kitty and the Midnight Hour), and Kate Daniels, written by Ilona Andrews (first book: Magic Bites), are inspirations to me personally, just like their creators are inspirations to me professionally.
Despite their differences, I bet Kitty, Kate, and Victory would have a great time sitting down with a beer together. And despite the differences in my books, I think urban fantasy readers will still find interesting characters and fascinating, exciting plots—the most important parts of urban fantasy, regardless of rules set forth by industry standards.”


To get more insights from J.L. Gribble and to learn more about her Steel Empires series, check out her website and her follow her on her current blog tour: www.jlgribble.com
About the author:


By day, J. L. Gribble is a professional medical editor. By night, she does freelance fiction editing in all genres, along with reading, playing video games, and occasionally even writing. She is currently working on the Steel Empires series for Dog Star Books, the science-fiction/adventure imprint of Raw Dog Screaming Press. Previously, she was an editor for the Far Worlds anthology.
Gribble studied English at St. Mary’s College of Maryland. She received her Master’s degree in Writing Popular Fiction from Seton Hill University in Greensburg, Pennsylvania, where her debut novel Steel Victory was her thesis for the program.
She lives in Ellicott City, Maryland, with her husband and three vocal Siamese cats. Find her online (www.jlgribble.com), on Facebook (www.facebook.com/jlgribblewriter), and on Twitter and Instagram (@hannaedits). 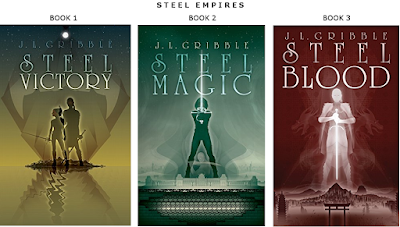 
As her children begin lives of their own, Victory struggles with the loneliness of an empty nest. Just when the city of Limani could not seem smaller, an old friend requests that she come out of retirement for one final mercenary contract—to bodyguard his granddaughter, a princess of the Qin Empire.
For the first time in a century, the Qin and British Empires are reopening diplomatic relations. Alongside the British delegation, Victory and her daywalker Mikelos arrive in the Qin colony city of Jiang Yi Yue. As the Qin weredragons and British werewolves take careful steps toward a lasting peace between their people, a connection between the Qin princess and a British nobleman throw everyone’s plans in disarray.


Meanwhile, a third faction stalks the city under the cover of darkness.

Thank you for visiting, J.L.!
Posted by Lady Notorious at 1:28 PM