The Continuing Battle for Gender Equality

So for my day job, I am employed by Nasdaq, a corporate giant. They (perhaps surprisingly) have a great corporate drive for diversity in the workplace. Today I had the chance to watch a panel discussion on the topic of “Women on Boards: Pathway to Directorship.”(meaning boards of directors) (Don’t worry, this post won’t be all business-speak) Hearing these incredibly accomplished and experienced women talk about women in management/director roles really got me thinking about how women are raised and considered by males.

The panel opened the talk with a discussion of regulations in Norway and other parts of Europe that require a certain percentage of board members to be female. I believe it was Norway that has instituted a policy that 40% of the people on boards been to be female. Woah.

Personally, I dislike this idea. In theory, it could force a board to put under-qualified people on the board in order to meet this quota. (A similar discussion takes place about the implications Affirmative Action in the education system). But both of these bring up the real issue—women are underprepared to take on executive roles, which can be linked to how we view females even when they’re children.

More on that in a minute.

One of the things the panel discussed was what happened when they, as board members, approached women candidates and asked them to join a particular board. In more than one instance, the women declined the offer because they didn’t feel confident accepting a new role that they weren’t already perfect at. They lacked the confidence to take on this new challenge. For comparison, the several panelists said “we’ve never been turned down by a male candidate.”

That brings up the issue that women lack confidence, both in general, but especially in executing in male-dominated worlds. This also, imo, leads back to how we as a society raise our girls.

Another item mentioned was the fact that among women who did have positions on boards, the majority of them had titles that are considered “support” roles, such as being a CFO, CMO, COO and so on, but very few were CEOs. There’s a distinct lack of women in CEO roles.

Another often mentioned idea was networking/mentoring. All of the women on the panel felt that in the workplace the men had a built-in networking system that groomed male employees for advancement and kept them on the path for career advancement. Women were left out of that network. It’s a holdover from the “good ole boy” “boys’ club” days that refuse to die.

Those days and their holdovers need to die.

When asked in the opening of the panel what the barriers were that kept women out of board rooms, the answer was “Attitudes. That’s the only issue. Male attitudes about the ability of women, their competency and all that. Once attitudes change, we won’t have this issue.”

As far as networking/mentors, it was generally agreed that mentoring was effective, but what surprised me (and it really shouldn’t have) was that most of the panelists STRONGLY recommended that women who wanted to be on a board have male mentors. To me, this is still part of the problem. It’s basically saying, “If you want to get in, you need to find a way in to the boys’ club of boards.” It basically says, “yeah, women are mentoring each other on being more proactive and confident, and that’s helpful, but if you want to get in, you still need to tap into that boys’ club network.”

The business network between women is growing, but in reality, it lacks the power of the male network. They just don’t hold positions of power in order to leverage the same level of benefit.

What was depressing about the panel was the realization that most of the women on the panel had gotten their board positions from a “lucky chance” sort of situation. So, say a woman had somehow gotten onto a board. All of the panelists got their initial roles on a board b/c that first woman on the board happened to know them and specifically offered a hand-up to their fellow female. What came across to me was that most of the women on boards had gotten their positions based on really-lucky-networking, not straight-up talent/competencies.

So to me, all of this comes back to how we, as a society, raise our children and shape our young women. This is a collective effort, this takes all of us. This takes changes at all levels and all areas of society.

The most important item that came out of this panel, for me, was the lack of confidence women had in themselves and their ability to tackle new situations. This isn’t something we can fix at the corporate level by writing laws saying that businesses need to have X% of women in their management structure. This needs to be addressed at a much earlier moment, when we’re all young girls, vulnerable to all of the pressures of society.

Girls need to be encouraged to purse ANY and ALL avenues that interest them. I’m not just talking about STEM initiatives, which are VERY crucial, but let’s talk about business skills, entrepreneurial skills, economics, and so on. Let’s get all of us—parents, educators, society—encouraging girls to take on ANY and EVERYTHING. Science, Math, Tech, Business, Arts, Social Studies, History, etc. Women and girls can do it all. Encourage them. Help them. Support them. We need to EMPOWER our young girls.

If we want diversity at the highest level, this needs to start at the lowest level.

This is making me think of Dove’s awesome ad/social interest campaign about “Like aGirl”
Also captured in this meme: 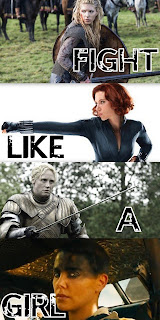 I’m talking about making a change at the VERY BEGINNING of life. Gender roles are sharply defined at way too young of an age in our society.

I’m thinking about Goldie Blox, who had an awesome Goldie Blox Super Bowlcommercial where girls took all of their “pink” toys and built a rocket ship out of them. The ad slogan for the campaign was “Tools for Future Innovators.” Not “Tools for Girls” or “Boy-Type Toys for Girls.” It was acknowledging that girls are future innovators, irregardless of gender. They don’t have to be “girls who are like boys” they are just themselves, girls who like building block toys. I really like the quote on Goldie Blox site:

My main point here is that we need to break down our idea of “being a girl” and get rid of it. We need to treat young girls and boys as people, and stop training them so hard in their gender strengths and weaknesses.

I grew up being called a tomboy, and as a child I was proud of that fact, and therein, I believe, lies the root of the problem. As a child, I knew that all girls were girls. But as a tomboy, I was something MORE than a girl. I was faster, stronger, fiercer, more independent. Did they call me a Kick-ass Girl? No. They called me a TomBOY. As is, you’re better than a girl, b/c you’re like the boys, too! The equation I learned? Boy traits > Girl traits. If I could have both traits as a girl, then I could almost make up for the fact that I wasn’t born a boy.

As an adult, I realize this idea is horrific. What I want is for young girls today to have no notion of the idea that the hierarchy of worth goes: girls < girls who can fit into the boys’ club < boys.

I’ve babbled on enough for today (and I could keep going!) but I want to close out with a quick piece on one of my fave people on the planet, John Stewart, and his comments on Bruce Jenner’s transformation to Caitlyn Jenner. (Way to go, Caitlyn! I am so happy for you that you can be yourself, finally!)

Here is a briefsum up of John Stewart’s bit on how, now that Caitlyn Jenner is officially a woman, she can look forward to being objectified and judged for her looks all the time now, like the rest of us women.