Struck by the Muse


Each of my speculative fiction stories has been born from a single image.

They’ve begun from one singular icon, the slice of a frozen moment in time that somehow captures the entire soul of the story, even if I don’t understand what that soul is yet. No matter the million of changes a story undergoes in its creation, these images have been as true to the final draft as they had been to the beginning.

The revelation of each of these images made such an impact that I can remember where I was at the time they came to me. I might have been turning over ideas before then, pondering this or that, but the story, the real story, did not exist until that moment.

I am about to start on my next novel, which is one of two I had begun 6 years ago now (and subsequently abandoned for years on a massive writing hiatus, Empress Ascendant being the other.) I’m sitting down to plot and this has me thinking, “What am I trying to say with this story? What is the heart of this story?” That brings me back to my original image for this story, and I wanted to share two of my story icons with you.

Sworn Sword is my first epic fantasy, and was my thesis novel at Seton Hill University’s Writing Popular Fiction program. It’s the story of a female swordfighter, Tae, who is on a quest to find the child of prophecy. This child will be a sorcerer of untold power, and is needed by both Tae and her enemy to activate—or destroy—an ancient weapon.

Tae has a lifelong hatred of sorcerers and all things magical. Her prejudice is extreme, and being involved in such a quest, forced to work with another sorcerer, is a grueling trial for her. Being a swordswoman is all she knows, it’s who she is. She places all of her self-worth on her martial skills. Without her blade, in her mind, she is nothing.

The iconic image for Sworn Sword came to me in the spring of 2003. I was commuting to UMass Lowell for my geology degree. I had parked my car and was walking into Olney for an 8:30 class. The sun was shining, and just before I reached the building’s doors, a simple image hit me.

It was a hand, palm up. Inscribed on the center of the palm was a solid 8-pointed star. The skin of the star was a silvery grey, and had a sheen like hematite.

How in the hell, you say, is that a whole book?

At the time I had no idea. I wasn’t even sure whose hand it was. At the time I had been thinking of this story of a female sorcerer, but nothing would come together. I had no plot and little backstory. Her name was Ilara, and even though I wanted to make her the hero of an epic fantasy novel, I couldn’t, for some reason, find her story.

That’s because I had it all wrong. Here’s the spoiler of the ending and why that one star matters so much:

That hand is Tae’s, and that mark comes when she unleashes her own magic for the first time at the end of the book. It is the sign that she herself is the child of prophecy they have been searching for all along. She is the sorcerer. It’s the very last thing the reader sees as the book closes. (It’s really part one of a trilogy or somesuch, but the rest are not written)

Because it’s so dear to me, I’m keeping the title of this work to myself for now. Let’s just call it Travelers. I am about one-third of the way into the first draft, and far from understanding the entire story. I can’t give you the full depth of the meaning of Traveler’s icon yet, because I don’t know it myself.

The icon is very much with me today, though, as I get down to work on the novel, and I just wanted to share it.

I was at my mum’s house, in her kitchen. I had finished Sworn Sword and was looking for my next novel. I wasn’t even sure what it was going to be except that it would have elves and magic. Why elves, I have no idea. I was just adamant about that. Of course it’ll probably be the first thing that gets changed ;-)

My first ideas for it had come, hilariously, from SeventhSanctum’s name generator. If you haven’t played with this, you should. It is both helpful and ridiculous. I can’t tell if it’s trying to mock the entire SF genre, but it does a fairly good job of it while generating names of everything from elves to pirate ships to alien races. You must check it out.

The generator had spit out two-word combo names and I was immediately struck by one. Grimcinder. I knew he would be an elven bard with dire portents. Again, why elven? Who can know the mind of a fantasy writer ;-)

The image for this novel, the one that gave me the main character and the basis for the entire magic system, came while I was sitting at the kitchen table, in the sunshine of course, sorting through some Magic: The Gathering cards. This is the art for one of the cards, done by the fabulous Rebecca Guay. 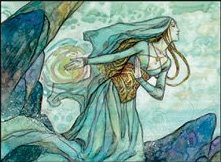 This is the main character of Travelers, her name is Silmande. What her story is, and what she is, well . . . you’ll just have to wait and see.
Posted by Lady Notorious at 3:05 PM