In the Spirit of Giving – Rescue Dogs Deserve Extra Love!

A friend of mine, Aimee Leigh Reichert, has the most beautiful and sweet rescue dog! His name is Timber, and he seems to be a hell of a guy. Aimee took him in when he was just 8 weeks old and suffering from pneumonia. He survived, and now he’s a very happy 1 year old! 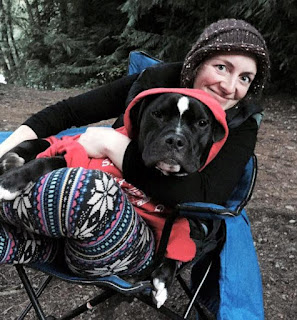 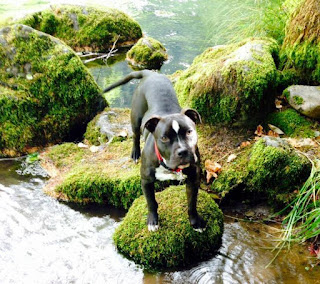 Unfortunately, they just found out that he has cruciate ligament tearing in both hind legs and he needs surgery to repair it. The cost is of course high, but Timber is only 1 year old. This surgery is the difference between a long happy life of running and a very painful existence filled with disability.

Despite the expense, they’re dedicated to helping Timber. If you’re interested in Timber and his story you can read about it here:

They’ve set up a CrowdRise fund where you can donate. Even the tiniest bit helps! 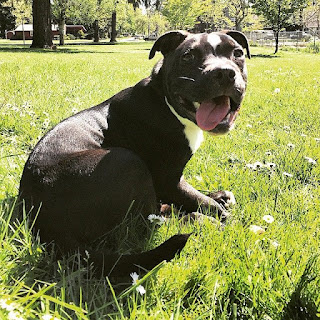 This story hit me hard for a few reasons:

1    1) Anyone who rescues unwanted dogs is an angel. Rescue dogs almost always require extra care (which of course means more money). This might be special medical treatment, training, or just personality quirks that require extra love and understanding. People willingly take on these dogs even knowing extra care will be needed.

Three of my last 4 dogs have been rescues, and I greatly admire everyone who takes in rescues.

I love pitbulls. They are fantastic dogs. True they can pack a serious amount of force into a bite, but their strength doesn’t make them a bad dog. BAD OWNERS turn pitbulls into a danger. (I can get on a rant about bad dog owners, but I’ll save this for another time!)
Instead, I want to tell you about my first rescue dog, Isabel, who was also a pitbull. She remains the sweetest of the dogs I’ve been lucky enough to adopt.

I found Isabel online by searching the MSPCA for available rescues. She had a great write-up: she was the staff’s favorite, always happy, always wanting to chase down tennis balls.

So, I drove into Boston to meet her. When I got to the shelter she was nowhere to be found! The lady at the desk and I searched all the pens, and I was heartbroken to think she might have been adopted already. I saw another beautiful pitbull while I was there, but I just didn’t connect with that guy. As I was getting ready to leave, a staffer brought Isabel in from outside – they’d been playing fetch with her in the back yard the whole time!

As soon as I meet her I knew she was the dog for me, and I adopted her on the spot. 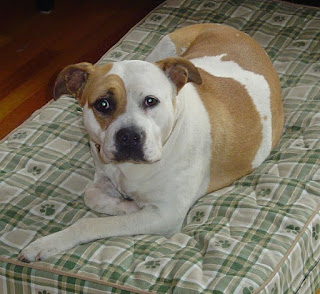 Isabel was about 2 ½ years old when I adopted her. Her teeth had all been filed down by whoever owned her before she was abandoned. At the shelter, she kept tennis balls with her at all times. (In fact, she could fit 3 tennis balls in her mouth at a time, and regularly did that :) )The staff speculated that she’d had a litter that had been taken away from her immediately, so Isabel tried to keep replacement “pups” with her at all times.

When she came home, she was afraid of men and hand-shy. If you were standing and reached out, intending to pet her, she flinched back because she thought you meant to strike her. So, she’d probably been abused by a man.

When I got her home she stayed with me EVERYWHERE. But she soon learned that I wasn’t going to abandon her, that we weren’t going to hit her, and that men were not to be feared. Once she figured that out, she was as happy and confident as could be :)

Why this story if we’re talking about Timber?

Because of the injury. Isabel LOVED to run and fetch. It was her favorite thing of all time. We started buying her kongs (b/c they’re nearly indestructible and she liked to chew). Isabel was happiest running after a kong. We’d stand at one end of the yard and throw it the entire distance. She’d sprint after it, bring it back, and do that over and over and over. It was pretty much her favorite thing about life.

Isabel waiting for me to throw the kong for her 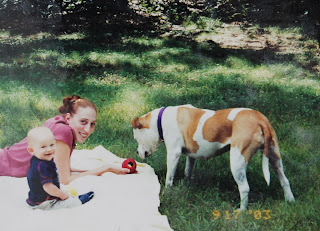 If she was on the deck when I pulled up in the driveway, as soon as I turned the engine off and opened the car door, she was there with a kong. She could have that thing in my lap before I could get out of the car!

I think she actually came to love men because she realized they could throw the kong farther and get her more running distance. :)

When I think about Isabel, that’s what I remember most about her, how much she loved to run. That’s what breaks my heart about Timber’s injuries. Pitbulls need to run. They have so much energy! And it just makes them happy.

I’m donating to Timber’s fund, and I hope you will consider giving a little bit as well. There are so many sad stories about pitbulls, I really want this one to have a happy ending! Every single cent makes a difference!

Here’s the link again if you’d like to help Timber keep on running! 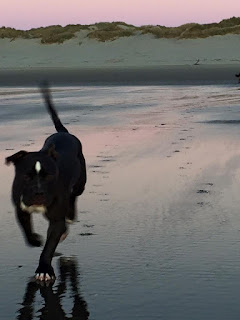