I am very excited to reveal the cover of J.L. Gribble’s second novel, STEEL MAGIC. Isn’t it fantastic?? 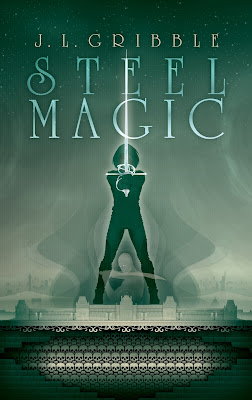 This is the second novel in her STEEL EMPIRES series, published by Dog Star Books. Here’s the synopsis:

Funerals are usually the end of the story, not the beginning.

Newly graduated warrior-mages Toria Connor and Kane Nalamas find themselves the last remaining mages in the city when a mage school teacher mysteriously falls ill and dies. But taking over the school themselves isn't in the cards. They're set to become professional mercenaries-if they make it through the next 18 months as journeymen first.

The debate over whether to hunt mutated monsters in the Wasteland or take posh bodyguard jobs is put on hold when a city elder hires them to solve the mystery of the disappearing mages. Toria and Kane's quest brings them to the British colonial city of New Angouleme, where their initial investigation reveals that the problem is even greater than they feared.

But when a friend is kidnapped, they'll have to travel to the other side of the globe to save her, save themselves, and save magic itself.

The first novel in the series, STEEL VICTORY, met with great acclaim. 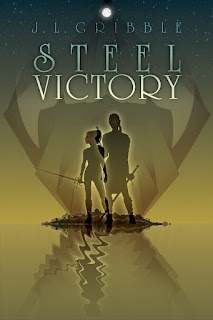 Some of my favorite reviewer quotes for STEEL VICTORY:

“High Fantasy, Alt-History, and No Apologies”

“The most unique feature of this debut novel is the setting--a highly creative mélange of genres (contemporary, fantasy, mystery, alternate history, to name a few) best described as postmodern urban fantasy.”

“Steel Victory has everything you want in a first novel. Strong female characters (multiple!), a love story (that violin!), action (sword fights!), espionage (battles!), politics (just enough!). It is a quick read with a writing style that sucks you in and makes you crave more.”

By day, J. L. Gribble is a professional medical editor. By night, she does freelance fiction editing in all genres, along with reading, playing video games, and occasionally even writing. She is currently working on the Steel Empires series for Dog Star Books, the science-fiction/adventure imprint of Raw Dog Screaming Press. Previously, she was an editor for the Far Worlds anthology.

Gribble studied English at St. Mary’s College of Maryland. She received her Master’s degree in Writing Popular Fiction from Seton Hill University in Greensburg, Pennsylvania, where her debut novel Steel Victory was her thesis for the program.

She lives in Ellicott City, Maryland, with her husband and three vocal Siamese cats. Find her online (www.jlgribble.com), on Facebook (www.facebook.com/jlgribblewriter), and on Twitter and Instagram (@hannaedits).

And last but not least, check out Bradley Sharp, the ultra talented cover artist:

Bradley Sharp was born in 1977 in Oxfordshire, UK. From a young age he filled many sketch books, so it only made sense to study Graphic Communication at Nene University, where he received a BA Honors degree in 1997.

But the real world called Sharp away from academics, so he traveled around the globe a couple of times, working as a graphic designer. Now he makes a living by designing magazine spreads, but freelances with vector illustrations, allowing him to create something far-removed from what he does in his nine-to-five job.

Sharp finds vector to be an easy tool and believes anyone can use it. "I'd say my artwork is nothing more than glorified doodling. I like the logical inconsistencies of surrealism and find inspiration from many places such as music or the science fiction genre. Dog Star's novels lend themselves well to my style. I look forward to working with DSB in the future, and hope fans will like the imagery as much as they enjoy the words." Find Sharp's work online at http://www.bradsharp.co.uk.
Posted by Lady Notorious at 2:20 PM